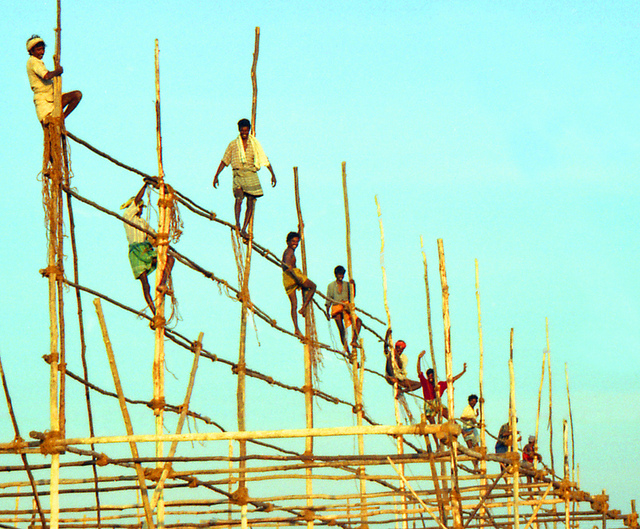 Working in the development sector is always a rewarding – and eye-opening – experience. While I was working with a group of migrants in the industrial belt of Ahmedabad, I got to see a totally different world that exists, nearly invisibly, in the midst of more privileged society. This sector – of approximately 80 million Migrant Workers in India – is deprived of even the bare minimum of basic human rights.

Uneven development is the main cause of India’s migration of workers, a human phenomenon which has historical, social, and developmental roots and wider implications. And the development policies by all the governments since Independence have accelerated the process of migration.

According to a study 77% of the population, i.e. nearly 840 million Indians, live on less than Rs.20 ($0.4) a day. Hence, the rural people from the downtrodden and backward communities and regions such as Bihar, Orissa, and Uttar Pradesh travel far afield seeking employment in the construction of roads, irrigation projects, commercial and residential complexes, building the new “shining” India.

Though these migrants are 70% of the ground level workforce in the factories of Ahmedabad, this population still remains invisible because there are no official records of the migrants maintained either by source or destination services.

Migration in India is predominantly from a short distance, with around 60% of migrants changing their residences within their district of birth and 20% within their State (province). The rest move across the state boundaries.

It is estimated that there are at present around 80 million migrants working in India, including:

Short-term: This part of the city is full of mostly seasonal Migrant Workers who have come from different states of India to earn a living, especially from the states like Bihar, Uttar Pradesh, Madhya Pradesh, and Rajasthan, which lack basic infrastructure to support them. They come to Ahmedabad at a time of the year when there is no agricultural work available in their native states. They work in various factories in Ahmedabad on contract for 4-5 months and return home once they have collected some amount of money.

Long-term: The second group is mostly male migrants with families in their native states. This is a more stable group, from the far off states like Bihar and Uttar Pradesh, and this group stays for a longer time. They make one or two visits to their native homes on an annual basis. They return and continue working here until they retire or develop a major illness for which they need family support.

With no identity in an unknown city, a 12-hour work shift from 8am to 8pm, filthy accommodations without ventilation, only two meals a day (sometimes only one), these workers are forced to work and stay in worst living conditions.

Yet, what they take back home with them at the cost of these vulnerabilities is questionable. Forget about social securities like insurance and emergency care facilities; primary healthcare is also not available to these workers considering their inability to access the government services and unaffordability of accessing private ones.

This situation forces them to continue working even with ill health and leads to delayed detection of critical illnesses that are sometimes even fatal.

Another major threat is the occupational hazards to which these Migrant Workers are exposed. The factories where they work use a lot of chemicals for dyeing, shading, and washing of textiles and the irony is that these workers handle these chemicals bare-handed and sometimes barefoot.

Here is one incident I witnessed. Sadly, almost 70% of the Migrant Workers in this area work in these conditions:

I was in sitting in one of the local private clinics in this area, and an employer came with one of his workers who had developed severe pain in the lower back. This person’s pain resulted from his work in the packaging department of one of the local mineral water supplies, where he loads 20-liter water jars on the delivery trucks.

However, another disease that was very apparent was the skin erosion on the lower limbs of this person from the knees to ankles. The cause? He was standing in chemically treated water for 8-10 hours a day while packing the jars. There were no precautions provided by the employer such as gum boots and gloves to avoid this situation.

Although there are organizations working on the issues of migrants in this part of the city and even across India, much needs to be done for this population. Aajeevika Bureau, Akhand Jyot Trust, KERA Social Service Society, Prayas, Naisargik Trust, etc., have been working with migrants coming to Ahmedabad.

A couple of organizations working for the welfare of these migrants do generate some data with the services that they provide; however, the tracking of these people is still a challenge. Partially because of the lack of available data, this group is barely considered in the formulation of development plans for the country.

There are a couple of NGOs working for the Migrant Workers’ cause.

Maitri is a New Delhi-based developmental humanitarian NGO that is committed to facilitating every individual’s Human Rights, especially the Migrant Workers and their families in urban environments.

Since 2005, Maitri has worked with over 45,000 individuals, providing education, community outreach, networking, and legal advocacy on the issues of social and health inequities and public health concerns. Maitri work is organized under two main pillars: Violence against Women and Migrant Workers.

Maitiri’s initiatives with Migrant Workers include facilitating access to Citizenship Rights to ensure access to basic rights including healthcare to vulnerable migrant populations like rickshaw pullers and the homeless, and providing educational and skill-enhancement opportunities for underserved children and women, respectively.

The objective of the Trust’s “Livelihoods for the Urban Poor” program is to establish institutional structures to reduce the vulnerability and raise the incomes and savings of migrant households, thereby contributing to their financial security, wellbeing, social and family support structures.

The goal is to create sustained programs to help target groups including home-based workers, vendors, rag-pickers, conservancy workers, domestic workers, and construction workers, to move up the value chain and be in a better position to negotiate with the government and society at large. They are subject to abysmal working conditions, often characterized by a complete lack of social security and the absence of basic facilities.

The program will target 300,000 migrants through 83 source- and destination-level centers over the next 3 years, while consolidating the work in existing centers. A Centre for Labour and Migration Solutions has been set up with the Aajeevika Bureau to provide technical support to the program’s partners.

The construction industry is a key employer for many of India’s internal migrants. The migrants come from across India to work long hours in return for little pay and few, if any, benefits.

DRF launched programs to create continuing education for the children of migrant construction laborers in 2008 with support from the Sarva Siksha Abhiyan, American India Foundation, and other government and private sector partners.

Construction jobs, and therefore the workers’ families, are highly mobile. As a result, children are left out of the regular schools. Frequently, with both parents are engaged in construction, younger children are left unattended to fend for themselves.

Older girls are often forced to drop out of school to care for their siblings. It is also not unusual to find these children engaged in casual labor. Further compounding the problem, it is notoriously difficult to track the movements of migrant children, both within the city and to and from their home villages, making educational continuity challenging.

In the first phase of programming, DRF focused its activities on establishing access to schooling and scaling up its work so as to provide as many children as possible with safe shelter, adult supervision, and basic educational provisions during the workday. Now, in Phase II, DRF’s primary goal is to improve the quality of education in each of its facilities.

Clearly there is much, much more to be done, but these programs are a start toward recognizing and helping India’s Migrant Workers.

– Bhavya Kumar is an Account Director for Innovairre, India. Innovairre supports 500+ nonprofit organizations around the world. For more information on Innovairre, contact us at Answers@Innovairre.com.